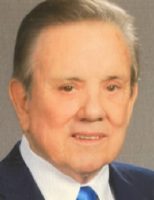 Preston Hood was only 26 years old when he moved from Amite City, Louisiana, to take over his father and grandfather’s car dealership in Fort Walton Beach. He set out to make Preston Hood Chevrolet a success in the 1960s as a part of the third generation of Hood auto dealers. Over a span of almost 52 years, he provided thousands of jobs for people and contributed to many community projects. His name still can be found at spots throughout the city, marking his lasting impact.

Many people were saddened to hear of Hood’s sudden passing Tuesday morning at the age of 78. Retired auto dealer Bob Lee was close friends with Hood for almost 50 years and lived across the street from him. “I heard the ambulances and didn’t know what was happening, but got a call shortly after. We’ve all been emotional and we’ll all miss him,” Lee said of Hood’s family and close friends. “He was very well known. Very well respected. Just a very kind and generous person.”

Preston Hood Chevrolet General Manager Bill Kelly worked with Hood at the dealership on Hollywood Boulevard for about 28 years. Kelly said Hood loved the automobile business so much that even at 78 he refused to retire and would be at the business practically every day shaking customers’ hands. “He would stay and work in his job as long as he was physically able because it was his passion and he enjoyed it so much,” Kelly said. “He just had such a passion for it, and he told me many, many times over he had no plans to retire.”

Kelly said many employees like him spent more than a decade at the dealership because of the enjoyable work environment Hood created. His friendly and kind demeanor made the dealership more than just a place of work, he said. “He treated all of his employees as family,” Kelly said. “He was just a father figure to a lot of people and took interest in not just what their job was and what they could do for him, but those people as people.”

Lee said Hood’s passion for the car business showed in his relationships with customers and employees. Although Lee and Hood were competitors in their industry for a period, Lee said it never once affected their friendship. “We had beach homes together down in Navarre. Our children all grew up together. We were very close,” Lee said. “He was a great friend. Very generous. A great car dealer. He was not just a friend to his employees, but to the community.”

Hood’s influence went well beyond the dealership, as he was involved in the community in many ways. Hood served as a director at First National Bank, now FNBT, and was involved in the creation of the Indian Bayou golf course in Destin in the 1970s.  His name also lives on at the Preston Hood Athletic Complex, which Hood called “one of the best projects I’ve ever seen” in an interview with the Northwest Florida Daily News in 2015. Hood was so impressed with the project that he donated $250,000 to help the city improve the center’s outdoor athletic fields.

Lee said Hood also was heavily involved with First United Methodist Church and contributed money to local mission opportunities to help low-income families and people living in poverty. “He was a big part of that church and their building program. He was financially successful so he was able to help people in destitution,” Lee said. “You can’t live here and be a part of the business community for that long without making a very huge contribution.”

Hood’s sudden death was a shock to many, and Kelly said “he will be greatly missed.” Those at the dealership are still struggling to come to terms with the loss, but Kelly said they hope to preserve Hood’s legacy. “We were all just totally shocked. It was sudden,” he said. “I think everybody here is mainly still in shock, but its our legacy for him that we carry on and do the best that we can possibly do for our clients, customers and the community.”