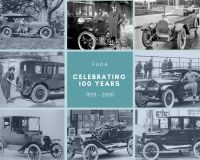 The year was 1920. It was the era of the Tin Lizzy, Stutz Bearcat, Hudson Super Six, Cole 8, Oakland and Durant and others. Nationally speaking, the industry was booming. But a lot of people had yet to be convinced that a horseless carriage was here to stay including legislators who looked upon our industry as one to be carefully regulated and heavily taxed.

Automobile dealers were few and far between in Florida in those days. A few local dealer associations had organized but contributed little to the industry as a whole. The majority of 1920’s dealers were interested only in selling automobiles. The idea of service hadn’t even entered their heads.

A minority group of dealers however recognized the need for organization, cooperation and teamwork and sent a delegation to Washington to investigate forming an organization. Thus the “Florida Automotive Dealers Association” was formed with service being sold to dealers as the up and coming backbone of the industry. And here we are, 100 Years later, celebrating an astounding centennial of service to the greatest industry in Florida!

Stay tuned as we celebrate all year with fun trips down memory lane. If you’d like us to publish pictures and history of your dealership, in print and/or social media, please contact us as soon as possible!