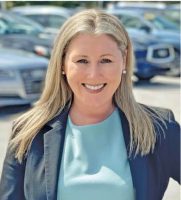 Christina Schwendeman accepted the newly created chief marketing officer position at Morgan Automotive Group in 2020 and still describes herself as both “lucky” and “humbled” that the group sought her out.

It was not her first go-round with the Tampa, Fla., group, and she had no idea that her work left such a good impression with its management team.

Morgan Automotive was her first client when she joined a Florida automotive ad agency in 2008.

The ad agency “assigned Morgan to me on day one,” she recalls.

Morgan Automotive had eight stores then. For almost two years, she helped craft the group’s marketing strategy before her career path led her to another agency.

But the second time, things were quite different.

Not only did the group reach out to her, Schwendeman was hired as part of the group’s executive team and the group had more than quadrupled to 35 stores. It currently owns 56 stores.

Also different: The nation was grappling with the powerful impact the pandemic was having on everyday life.

But people still needed to buy vehicles and used-vehicle inventory was tightening. On top of that, competition from the “CarMaxes of the world” for buying consumer vehicles was fierce, she says. “We knew we needed something that would stand out.”

The result was “Morgan Buys Cars,” the group’s uniquely designed digital platform that makes cash offers to consumers who want to sell their vehicles.

“We partnered with a Tampa digital company to create our own individual trade tool so we could control the algorithm based on market need for what we were offering consumers,” said Schwendeman. She helped lead the development of the tool with key members of the group’s executive team and general managers.

“We knew we wanted to be as aggressive as possible for our customers to acquire their trades.”

In its first 90 days, the site attracted more than 30,000 users and generated over 2,100 leads, she said. It was deemed a success and is still in operation.

Schwendeman first worked with the dealership group well over a decade ago, but she recalls how Morgan’s now COO Tom Moore predicted that “one day, we will work together again.”

“When they were ready for a CMO, I was lucky enough that they came directly to me,” Schwendeman said. “Every time I tell the story, I am very humbled because I still can’t believe it myself.”