On May 22nd 1972, Cecil Clark Chevrolet opened for business in Leesburg Florida. Cecil and Jackie Clark, husband and wife, along with their two children Greg and Cindy, moved to Leesburg with the goal of being the number one dealer in Central Florida. Cecil started his automotive career in rural Alabama. Moving up the sales ranks, Cecil always aspired to become a dealer himself.

Moving the family to Charleston, SC and climbing the ranks at another dealership, it became apparent that the next step was working with General Motors to find his next location and open his own store. Chevrolet Motor Division offered three prospective locations for the newest dealership franchise in Myrtle Beach, Key West and Leesburg, FL. Cecil and Jackie thought that Leesburg would be the best place for their family.

Purchasing an old orange grove on 441 across from the airport, Cecil and Jackie chose the location of their new store and constructed it in accordance with Chevrolet. They even picked the fruit from the trees prior to construction to pay for his first parts inventory order. Greg and Cindy Clark both grew up in the family business and both became Chevrolet Dealers themselves. Joseph Clark, son of Greg and Lauta Clark is the third generation in the family business and works to preserve the legacy of the dealership. 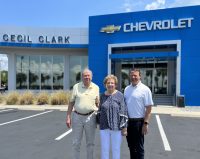